In a start-up, everyone has other projects going.

Here are three of the projects people in Fire Opal have created in recent months. Two are published. One is pushing towards the printer on Indiegogo.

Wade's Ravens
Wade Rockett handles community relations for Fire Opal, notably on 13th Age. How pleasant that is to say. Working with Wade has been wonderful. Now he has published a Pathfinder booklet for Open Design called Advanced Races 5: Ravenfolk, a supplement for the new world of Midgard that's being put out by Wolf Baur and Companions. Ravenfolk started as Wotan's spies among the mortal races. They have a reputation as thieves but what they're really about is stealing secrets. Yeah, that's a race with Prince of Shadows stamped all over it. So Wade took a first swing at the 13th Age-compatible conversion notes and we'll probably nudge those notes a bit in the future. 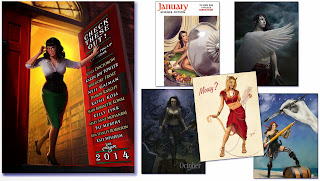 Lee's Pin-Ups
I've loved Lee Moyer's literary and science fiction calendars the past couple years. This year's calendar is a benefit for the Clarion Foundation, the people who put on the extraordinary science fiction and fantasy writing workshops. It's a great cause, Lee's art is a delight as always, and you can obtain the calendar by contributing to the Indiegogo campaign that's running another three weeks. The video has a couple cute moments, I'd say. With the calendar done, we're going to get Lee back for a few more pieces for 13 True Ways, and the better the Indiegogo goes the better mood he'll be in.

Brandon's Quingo
Brandon Bozzi produced our 13 True Ways Kickstarter video and will surely work on other Fire Opal projects in the future. His current project is a socially responsible gaming company called Game It Forward. Their first game is Quingo, available for free on iPhone and iPad. It's a savvy quiz game with well-implemented time pressure mechanics, pop-culture awareness and wonderful side-jokes. And that's just the fun side. The serious side is that you earn cash rewards for a charity of your choice as you play. My wife Lisa loves it and lucky for us it works extremely well as a two-player team-up on iPad, two people stabbing or nudging the screen depending on their spheres of knowledge. We do OK with Revolutionary war battles and animals that are invertebrates, but the 80's pop songs are killing us.
Posted by Rob Heinsoo at 5:21 PM