We are at GenCon. I'll be at the Pelgrane booth often during the convention, Jonathan is flying in later tonight.

Simultaneously we've started a Kickstarter drive for 13 True Ways, a 13th Age roleplaying sourcebook by the original team of me and Jonathan and Lee and Aaron. 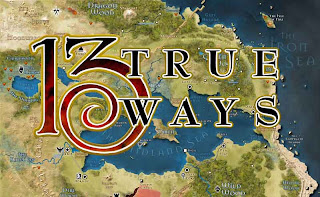 The video attached to the Kickstarter may have a couple fun moments even for people who aren't so much into gaming. For the record, while I am now on video accepting the appeal of tyrannosaurus rex, I'm personally on the side of triceratops.
Posted by Rob Heinsoo at 6:37 AM