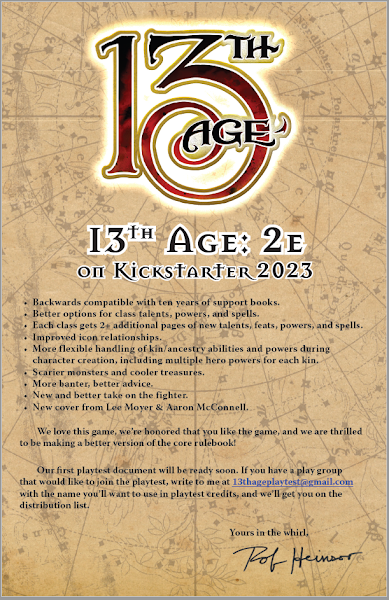 Yes, we’re making a 2nd Edition of 13th Age! And yes, that’s present tense: work has already begun, and you can sign up to playtest the new edition by writing me at 13thAgePlaytest@gmail.com.

The image you see here is a slightly edited version of the playtest flyer we handed out at GenCon, revealing more of the updates we’re making to the game. Today I’ll say a few words about the first four items in the list and talk about the remaining items in a future post.

Backwards compatible: I love it when new editions let players use all the books they’ve already bought and the ideas they’ve created in their campaigns. We’re not interested in making you buy new versions of the Bestiaries or do frustrating conversion work to use previously published adventures. There’s going to be an appendix in 2e suggesting things like “You could use the new default bonus for the magic belts in Book of Loot and Loot Harder since we’ve changed that in 2e,” but the core math and the combat rules will be the same. You won’t need to re-buy books, not even 13 True Ways. If there’s a 13TW class or two that needs brushing, I’ll handle that in another book focused on character classes.

Better options for class talents, powers, and spells: As originally published, some classes have a lot of great choices for talents and spells, while other classes have a few great choices and a significant number of meh choices. One of the biggest goals of 2e is to give every character more interesting choices. Spells that sounded fun but turned out to be not-so-good have been improved. Talents that didn’t measure up have been downgraded into class feats. Feats that were originally epic feats now frequently appear as adventurer-tier feats, with champion-tier and epic-tier feats above them that truly feel epic instead of like small math-bumps.

Each class gets +2 additional pages: Classes like the ranger and paladin that were always quite simple now have talent options that can make them more interesting for experienced players. Classes like the sorcerer get more spells with a greater range of effect. Most of the classes are getting quite a bit more than 2 pages; so far it’s only the rogue that hasn’t grown beyond that.

Other talking points: I’ll post about the remaining five bullet points soon. I’ve also been seeing speculation and questions about who is working on this book, and whether that team will work on the line going forward. I’m writing a separate post about that to hopefully clarify things.

We expect to send out the first widely distributed playtest packet sometime in September or October, and like the flyer says, you can write us at 13thAgeplaytest@gmail.com any time before then if you’re interested.