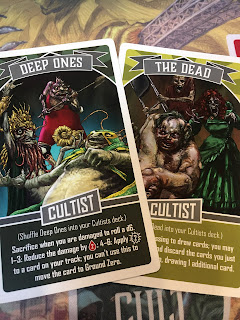 (all art from the wild pen of Kurt Komoda)

I’d always hoped to add servitors of the elder gods to the game, cards that would have the same card backs as Cultists. When we started the Kickstarter, I presumed that new Cultists would be a project for the future. But the future arrived during the KS. Shane and Dennis found a way to add The Dead to Hastur’s Cultists and recruited the Deep Ones for Cthulhu. Kurt handled the art, I did some mechanics, and ta-dah, mission accomplished. But maybe I missed a step: I didn’t adjust the Cultists paragraphs on page 13 of the rulebook to account for these KS-exclusive cards. Some people have asked about it.

So here’s a rewording of the rules to account for the new Cultists. I’m going to phrase these rules to reflect the way I use the Cult tile, which is different than how the rulebook recommends using it. I’m also not going to use the terse style that saves space in a rulebook. This will be wordier.

Cultist cards are in a separate category from the other cards in the game, distinguished by their own card back to prevent them being mistaken for cards that are part of your normal deck and your normal hand.

Before the game, shuffle your Cultist cards and place them face-down as a separate Cultist deck on your Cult tile. Use as many Cultist cards as you have available for your god. (For Kickstarter backers who bought everything, Cthulhu will have 8 standard Cultists, 5 Willing Sacrifices, and 5 Deep Ones. Hastur will have 8 standard Cultists, 5 Willing Sacrifices, and 5 The Dead. If you’ve ended up with fewer Cultists than that, don’t worry, just use what you’ve got.)

Neither player starts with any Cultists, but some cards can grant them to you. When you gain a Cultist, draw the top card from your Cultist deck and keep it on the edge of your hand of cards so that it doesn’t get mixed up with the rest of your normal hand of cards. Given that there’s not a lot of text on the Cultist cards you’ll need to refer to often, my method is to turn them upside down so I don’t confuse them with the cards that are officially in my hand. You could even just turn them backside up so that all you can see is the Cultist card back. Because a Cultist card doesn’t count as a card in your hand, you’re just holding it with the rest of your cards to keep track of it as an available resource. If you feel like setting it somewhere else, go ahead! There’s no limit to the number of Cultists you can accumulate. 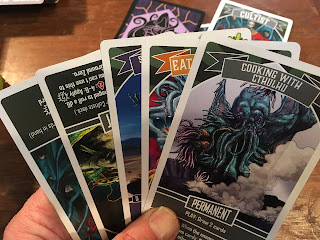 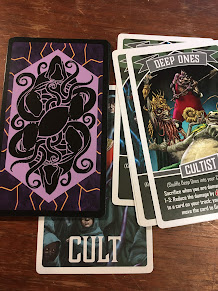 The full rules for each type of Cultist are printed on that card. In other words, if the Cultist in your hand is one of The Dead or Deep Ones, you won’t be able to use it for the standard Cultist sacrifice.

At the moment the Willing Sacrifice cards don’t accomplish any more than the normal Cultists . . . aside from the possibility of making a mid-game sacrifice of a loved one (or the first friend I played D&D with) who strongly supported our Kickstarter! But when the game has expansions down the road, we’ll find a way to add some zing to the Willing Sacrifices.