Ruby Beach is one of the most beautiful beaches in Washington. This panorama shot is from 2017, catching a moment when Lisa, our dog Roo, and my cousin and her husband were the only people in the panorama.

We saw amusing evidence of Ruby Beach’s international appeal on this trip. We just missed the people who scratched this message into the sand, so we can’t be 100% sure they were German. 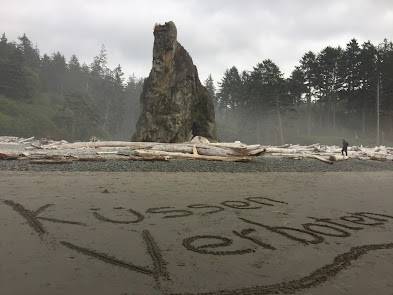 But we were positive of the language spoken by the next three people to arrive. Three French folks showed up as we were admiring the no-kissing sign and immediately started scratching a response in the sand to the south.

I’m still bummed we didn’t stick around to read the French response, but we were running late and maybe a little cold and we kept walking.