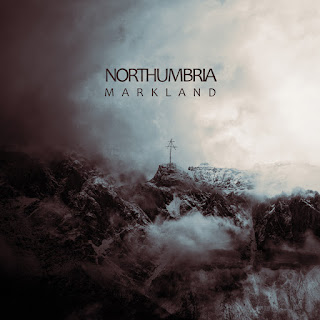 I've become fond of the Cryo Chamber dark ambient label, available on Bandcamp. My favorite album in the genre, so far and by far, is Northumbria's Markland, the second of three albums focused on Norse journeys to North America. I could type awhile about its moody sweep and beautiful soundscapes, but I'm no music critic, and it turns out that the album was selected by Simon Heath, who runs the Cryochamber label, as one of the label's ten notable productions. He wrote about Markland quite well here, an interview that contains something like two hours of samples from the Cryo Chamber label.

The same interview reveals that Heath started composing music to accompany sessions of the KULT roleplaying game! Years later, after the Kickstarter for the second edition of KULT, Heath found out that it wasn't a one-way relationship: "Talking with the authors [of the new edition], I found that they would at times listen to Atrium Carceri while writing--the loop of inspiration had come full circle . . . . "

Of the ten albums Heath chose for the label showcase, there's a long Hastur piece that comes with a 20 page booklet and an alien visitation album that does not go well for humanity called Visitors, by Eximia, made of field recordings from Eastern Europe. That's another of the albums I listen to fairly often while working. Visitors isn't surprisingly uplifting, like Markland, but sometimes an alien invasion is the write-soundtrack.

Today, May 1st, Bandcamp is giving 100% of all proceeds to the artists! Check out bandcamp.com for a whirling presentation of the albums being sold right now. If you miss today, Bandcamp is still awesome as a way to listen for a long time and decide if you want to buy.