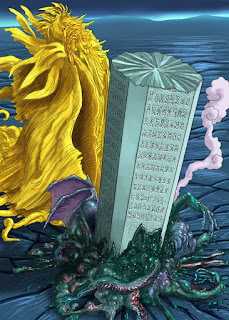 “Sometimes bad things happen to bad entities” is an apt slogan for Wrestlenomicon! The first two gods into the ring are Hastur (picture above, standing) and Cthulhu (picture above, splatted). We’re starting the Kickstarter on March 5th with the decks for those two gods as the core game.

After initial design and playtesting, I was too excited about this game to let it lie fallow while the production details were being wrangled into place by Arc Dream Publishing. I went ahead and designed the Nyarlathotep deck and am working on Yog-Sothoth. If the Kickstarter community gets behind the game and stretches it into something powerful, we’ll end up with multiplayer rules and a full royal rumble of elder gods!

A few early links . . .
For a bit more of the game’s art by Kurt, as well as notes from Dennis and Shane, visit Wrestlenomicon.com
For some notes on mechanics that I wrote during an early playtest phase, see this blog.
Here’s Bebo’s GLOWing intro video.

And here’s a look at an early version of the layout for the Sometimes Bad Things . . . card. (Among other things, the symbols will be a bit different in the final.) Layout artist Simeon Cogswell has been wrassling with the Kurt’s art to fit it onto our tarot-sized cards.