This weekend: I'll be at Dragonmeet in London on Saturday with the Pelgrane crew. I love visiting London, and Wednesday I got to attend Arsenal's 5-0 tonking of Huddersfield, so all is well.

Work in progress....
The first five books mentioned on this list are Pelgrane projects for 13th Age. After that the list moves to other companies and other games. 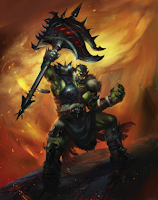 [[cover art by Jessica Chung Ti Lee]]
Fire & Faith:  The third of the battlescenes books by Cal Moore, with ready-to-run mini-adventures for the icons who rely at least partly on faith: Diabolist, Crusader, Priestess, Great Gold Wyrm. The book didn't quite make it into print in time for Dragonmeet. Printed copies are showing up later in December, for now you can pre-order at the Pelgrane store and get the PDF.

[[cover art by Melissa Gay]]
Book of Demons: This one is in layout. Among the reasons the book will be notable is that it contains a rarity: a new 13th Age character class, the demonologist, something I put together after initial work by Gareth Ryder-Hanrahan and another early draft from Paul Fanning. Elsewhere in the book, the six hellholes Gareth created are wild. He'd written art suggestions that I said were not-doable, "tone it down, a lot, this is just too convoluted, no artist is going to want to handle this," I said. And then Cat Tobin went and proved me very wrong, finding an artist named Agathe Pitié who pulled a full Hieronymus Bosch.

Book of Ages: I'm midway through developing Gareth's wonderful combo of DIY chronicling and sample ages, full of monsters and magic and spells from the ancients. Not sure of publication date yet but it's next in the pipeline.

Shards of the Broken Sky: I've got a bit of final devwork to handle on ASH LAW's big adventure. Art is midway. Maps are still needing to be arranged.

Loot Harder: ASH's new book of treasure, with bits from a few couple other writers. To be published in 2018, either just before or just after Shards I believe.

13th Age Glorantha: It will be a 400+ page book from Moon Design. We recently shared Chapter 3: Playing in Glorantha with KickStarter backers. Six of the book's eight chapters have been laid out by Chris Huth. Layout finishes soon. I'll be handling indexing and other final bits when I'm back from Dragonmeet. I'm amazed by the final layout. Jonathan prefers not to see our books as they're in progress, he likes to wait until they are done--he's in for a treat!

Wrestlenomicon: A two-player card game from Arc Dream Publishing, presently in open playtesting, aiming to be on Kickstarter sometime in 2018 since its art by Kurt Komoda is complete and we're just getting the mechanics right. (See the previous post in this blog.)

Dragonfire: I didn't work on Catalyst's new Dragonfire game of D&D deckbuilding directly, but my business partner Jay Schneider did, and it's pretty much a second edition of the Shadowrun: Crossfire game our Fire Opal design group created, which is why Mike Elliot and Greg Marques and the rest of us are credited as designers. As a second edition, I think Dragonfire is an improvement over our Crossfire mechanics. I believe Crossfire may be getting an update soon to match some of the improvements, and I'm excited to see Dragonfire's progress in the months to come.
Posted by Rob Heinsoo at 4:45 PM