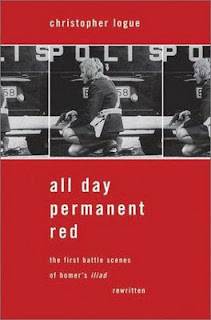 When I read the Iliad as an undergraduate, I envisioned it as if filmed on the side during the night warfare scenes of Apocalypse Now. I wasn't looking back to imagine a true record of an ancient conflict, I was translating a clash of heroes into the most powerful visual language I’d been exposed to.

This will do as a short cut to describing Christoper Logue’s poetic retelling of the Iliad. He’s using the most powerful visual language he can invent to retell an epic war between heroes, patron gods and hapless (but named) spear fodder.

A pure classicist might freak out at battle scenes invoking the future spirits of aircraft carriers smashing through the sea of spears, or references to King Marshal Ney smashing his sabre on a cannonball, or the thwarted lethality of a Tiger tank at Kursk. But the images from other times are judiciously chosen. Logue chants with voices from the past and voices from the more recent past, and if you have any fondness for the Iliad, you won’t regret trying this alternative phrasing.

War Music: An Account of Books 1-4 and 16-19 of Homer’s Iliad is the other piece of the ongoing translation I own. Unlike all day permanent red, it’s not just battle scenes, but I’ll wait to recommend it until I’ve finished it.

I've seen a couple different covers for War Music, both interesting choices. Which leads me to believe that the cover of all day permanent red carries an extra kick if you know where the photo is from. But I don't recognize the image and would love to have it explained.
Posted by Rob Heinsoo at 6:56 PM