Marvel Legendary uses Team Icons that match some iteration of the comic book universe's affiliation web. Teams are another fun way to create combos as you build your deck, but they didn't feel like a natural part of the Big Trouble in Little China story.

Instead of using the Team Icon shorthand to show how characters are affiliated with each other, I used Hero names to represent some of the stronger, more noticeable, or funnier connections between characters in the Big Trouble storyline. Here are three examples of a mechanic that's spread through the set. 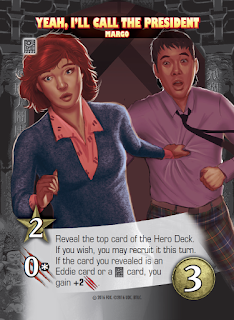 Margo's Yeah, I'll Call the President plays off the 'romantic' subplot that springs upon viewers in the final scenes! She's definitely interested in Eddie. And in order to combo with cards that are more in the reporter's telephone-tech arsenal, the card can also combine with other Tech cards. 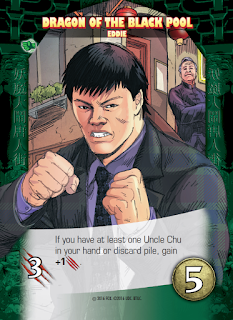 Eddie has a couple interesting combos, but given that he seemed surprised by Margo's interest, they don't involve Margo! Dragon of the Black Pool plays off Eddie's place alongside Uncle Chu, who is the grey 3-cost card that takes the place of the S.H.I.E.L.D. Officer from Marvel Legendary. The forgiving combo rule for this card's wording means that you can buy an Uncle Chu, put in your discard pile, and then play Dragon of the Black Pool and get the bonus. 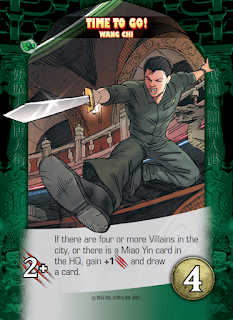 Wang Chi's Time to Go! shows another way that a few of the Big Trouble characters interact. Given Wang Chi's longing for Miao Yin, it's not about *having* Miao Yin in your hand--it's about longing for her as she waits as one of the cards someone is going to get hold of! Or, in games that don't feature Miao Yin, or when the villains are getting close to escaping the city, it's about needing to kick butt when the other players haven't gotten the job done! If everyone is doing their job and taking care of the villains handily, the card's not as good, but that's what I call high class problems.

Players who prefer using optimal groups of Heroes may not want to use Time to Go! in games that don't involve Miao Yin. Unlike most of the other Legendary sets, Big Trouble in Little China provides an option. I wanted to increase the number of possible games and there was a limit on how many Heroes we could add. So instead of adding more Heroes, I created an extra 'common' card for the film's two central characters, Jack Burton and Wang Chi. In Wang Chi's case, if you'd rather not play with Time to Go!, you can play with You Gotta Help Me! and Everybody's Buddy instead. 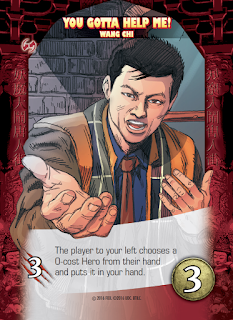 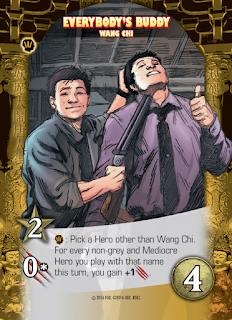