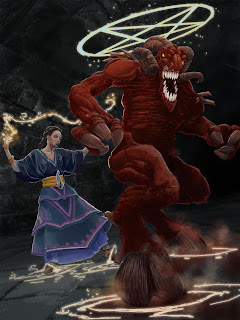 I had fun writing this one because I've been thinking a lot about how summoning works in 13th Age while working on 13th Age in Glorantha. Wizard and cleric summoning spells don't work the same as the druid and necromancer spells that appeared in 13 True Ways so the article starts with the new rules, part of the reason this is the biggest installment of the Monthly so far.

Highlights of the spells include lantern archons that are better at healing allies who have some trace of intelligence, wisdom, or charisma (healing equal to the highest ability score modifier!), the pentagram halos that float above the heads of demons you otherwise probably shouldn't be summoning, and the laughing demon, a new demon type that's surprisingly easy to control, but that may mean the joke is on you.

You can see the demon-halo and the laughing demon in the wonderful cover illustration by Rich Longmore, shown without logos above. There's more great art by Rich inside the issue, including a beautifully expressive shot of a wizard summoning an earth elemental that influenced the final mechanics.

This isn't the last word on cleric and wizard summoning. We'll follow-up on the subject in later products. Feedback on the spells in the article will also help the things that make it into print later. (And I should mention that the campaign variants mentioned in this issue's original capsule blurb will also show up in later products. I ended up sticking to spells and definite rules instead of outlining all the other options.) A few days ago we put out Eidolons byASH LAW, an issue of the 13th Age Monthly that harnesses the full monster description style we used in the 13 True Ways Bestiary. If you helped playtest the Bestiary, you may even recognize these eidolons, because we put out an earlier version as part of the playtest package. Playtesters liked them, I liked them, it was only a matter of time before we were going to publish them.

What follows are developer notes on the article. If you want to see what I'm talking about, pick up a subscription to the 13th Age Monthly and you'll get this issue and the four previous issues as part your subscription.

Our Focus on the Icons
I pulled eidolons and several other monsters out of the 13th Age Bestiary because the Bestiary was the first major product in the line and I wanted it to keep our focus on the icons. Eidolons are creatures from other realities. They warp the rules, so much that ASH included optional madness rules for PCs forced to deal with other realities. That’s fun stuff for GMs who want it, but in our very first 13th Age support book, I decided to stay closer to mainstream fantasy by not summoning too many non-Euclidean creatures from outside time and space.

As the line developer for 13th Age, the Bestiary taught me that designers needed more guidance about using the icons that are central to 13th Age. The creative streak that leads people to design games and write stories is sometimes a wild streak. When creators see a setting that’s all about something particular, like the icons, the temptation is to veer away from ‘what everybody is doing’ and bring in themes that haven’t been touched yet.

Obviously that type of invention is a good thing, most of the time. But there’s are several big reasons that most published 13th Age material stays focused on the icons, and one of these reasons that may not be apparent is to allow players, GMs, and individual campaigns to happily riff on everything else! The baseline in rpgs is a line that gets criss-crossed and repurposed by most every game table. By keeping our focus on the icons and everyone who is involved with them, we leave more space for the character who wants their One Unique Thing to be truly unique and the GM who surprises everyone with a campaign idea no one saw coming.

Turns out that eidolons could also spring some of those surprises. They’re a multi-purpose tool for campaigns that want a new approach to NPCs and monsters that can only temporarily be removed by sword and spell.

The Optional Madness Mechanics
ASH is extremely fond of warped things from the outer colors of the reality palette. He’s wanted madness mechanics for awhile, I think. My sticking point is that madness mechanics have to be fun. This is a game that has to stay enjoyable to play rather than a simulation of what happens to a brain under assault from colors beyond space. Sometimes game mechanics for this type of thing are only enjoyable if you can appreciate the aesthetics of disintegration without caring that you’re now useless. There are good games that take that path, but 13th Age isn’t one of them. People who test these mechanics and send us playtest feedback at 13thAgePlaytest@gmail.com will have input on the book that’s underway that will use a version of this madness approach.

A Note on Art
Eidolon appearance can be nearly anything. And yet each of the eidolon illustrations, from Rich Longmore’s wonderful eye-catching cover to the roiling mess that is the eidolon in war form, has the same style of six glowing eyes.

First, this is mostly because I sent Rich a photo I’d taken in art museum of Catalonia in Barcelona as reference. My photo looked like this: 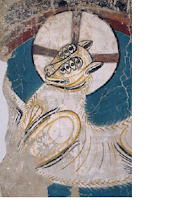 So Rich gave me what I asked for, albeit with six glowing eyes instead of the seven I just realized are showing on the creature above.

Second, you don’t have to interpret the art as saying that all eidolons have six glowing eyes. In my case, it's a post-facto explanation, but I think it works: these are all illustrations of the same eidolon!

As ASH said, Each eidolon is different and can assume different forms (as mentioned later in the stats section), but each eidolon also has its own distinct “look” and “voice” that it possesses no matter what shape mortals perceive it to be taking.

This eidolon’s look is that it has six glowing eyes no matter what form it’s in!
Posted by Rob Heinsoo at 5:40 PM No comments:

A funny thing happened on the way to the publication of the second ESW set, Epic Spell Wars: Rumble at Castle Tentakill.

Actually, I wish it was funny, but it’s not, and I’m no longer the target audience.

I handled mechanical design on this set and its Mt. Skullzyfyre predecessor, aided by Matt Hyra’s devteam at Cryptozoic. Cory Jones of Cryptozoic renames the cards and writes the art descriptions and writes the story in the rulebook. What that means is that a large portion of the game’s initial success came from Cory, because I suspect that more people bought the game for its Nick Edwards art and its over-the-top theme than for the mechanics. I’d kinda hoped to shift that equation a little with set 2, because I was really happy with the choices added by the new mechanics, Blood, and creatures.

But I was wrong about thinking that the first set had been pushed to the edge. I didn’t realize that Cryptozoic was going to put an AWESOME MATURE CONTENT AND PROFANITY warning on the box, and I didn’t realize what that would mean.

I saw the cards for the first time last week and I wasn’t amused. There are sexist cards, racist cards, sniggering cards, and just plain ugly cards. It irritated me so much I only got through half the cards the first day.

I’d been thinking of ESW as a game I was happy playing with my female and male friends and at conventions with strangers. But that’s not true anymore, unless I strip out the sexist and racist cards and squint at the rest.

I view this Adult Swim approach as a mistaken rebranding of an already successful game property that had wider appeal. Cory sees it as a minor alteration of an already edgy property.

And maybe he’s right about the minor alteration angle. It looks like I didn’t take the storyline in the first rulebook seriously enough, probably because it ticked me off. Certainly I believed that the game had found its tone the first time out. Turns out I was wrong. If this second set really is only a minor alteration, it turns out that the first set was as far as I was comfortable taking a game meant to be played by people I like.

So I’m opting out of Epic Spell Wars publicity. I’m not pushing the game or running it at conventions.

Cory has apologized for surprising me with the switch to the NSFW model of the game and has agreed to take my name off the cover of the second printing.

The anthropologist in me is curious to see how this plays out. The rest of me is irritated.
Posted by Rob Heinsoo at 10:36 AM 2 comments: